How the Millicent Rogers Museum Is Preserving Southwest Jewelry with Goldsmith, David Anderson

As a Taos native and skilled goldsmith, David Anderson has a deep connection to Southwestern jewelry. That connection led him to a position on the board at the Millicent Rogers Museum, and a role repairing the famous socialite’s extensive jewelry collection. He joined the Jewelry Journey Podcast to talk about how Millicent became the foremost Southwestern jewelry collector of her time, his process for repairing her historically significant jewelry, and his own work as a goldsmith and mokume-gane expert. Read the episode transcript here.

David Anderson is widely considered the foremost Taos repair expert, especially heirloom and vintage jewelry. He loves turning antique gems and settings into completely new works of art for his clients, and teaches jewelry making classes in his studio by appointment.

David is a native of Taos, New Mexico. His first experiences that led to a lifetime of goldsmithing were at a very early age while tinkering in his father’s workshop on the family ranch. In high school David’s first jewelry experience was with his Navajo friend who instructed him in the process of fixing a turquoise and silver watchband. This interest in intricacy led David to immerse himself in historic and spiritual jewelry styles. His time studying in New Mexico, New York, India, Italy, Egypt and Bali shows itself in dazzling and detailed metalwork.

David utilizes an assortment of fabrication techniques in his designs, which include hydraulic die forming, chasing and repoussé, engraving and lapidary techniques. He makes his own mokume gane mixed metal for his carved “Guri Bori” rings. David’s style continues to evolve, but the underlying theme in his work is mastery of technique. 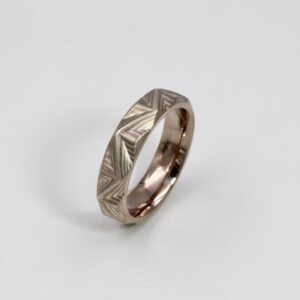 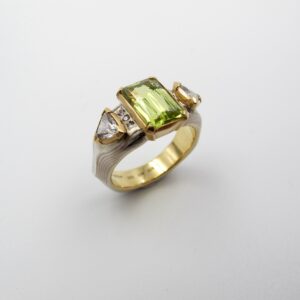